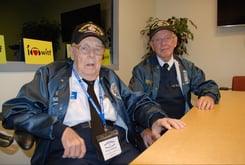 The fight continues for World War II Merchant Marine veteran Bill Balabanow. This time it’s not in the Pacific or Atlantic, but at a local memorial in Lititz, Pennsylvania. When Bill learned that the veterans memorial would recognize all of the branches of the service but not the Merchant Marine, he sprung into action just like he did nearly 80 years ago.

Bill had tried to join every branch of the armed forces during World War II but was listed as 4F, or unfit for duty, due to a serious curvature of the spine resulting from scoliosis. Not deterred by this (or the need to falsify his mother’s signature), he tried the Merchant Marine. Bill remembers that they were desperate for men at the time and in particular they needed radio operators. So, he signed up and went from the training center at Sheepshead Bay in New York to nearby Hoffman Island for specialized training on radio equipment.

His first ship, which he recalls “wasn’t very new and wasn’t very pretty,” took him to Marseilles, France. They were carrying general Army cargo with tanks on the deck, and they moved in a small convoy. Bill wasn’t scared of entering enemy territory. He was just excited to see France.

After a few more trips moving supplies back and forth between Europe, America and the Caribbean, Bill headed out to the Pacific for the first time. The Japanese were still a serious threat to U.S. ships and, for the first time, Bill was worried. Despite being loaded down with fighter planes, this vessel was faster than his previous cargo ships, and so they moved quickly without escort. Unloading their goods safely in the Philippines, they would learn on their way back to the States that the bomb had been dropped and the war was over.

Sadly, this was not the end of the fight for Merchant Marine like Bill Balabanow. Many jobs were being reserved for those who had served in the other branches of the armed forces. Bill would remain in the Merchant Marine for another 31 years but would keep his occupation secret. He felt there was a stigma attached to the Merchant Marine, that people either didn’t know what they were or bad-mouthed them for not being part of the other armed services. This would change in 1988 when the Merchant Marine were finally given the veteran status that they had always deserved.

From that point on, Bill has been a proud and vocal advocate for the Merchant Marine. He began giving speeches across his corner of Pennsylvania, educating Navy clubs, oral history groups and schools on the important contributions of the Merchant Marine. But when a new memorial to veterans was proposed without any recognition of the Merchant Marine, Bill became a one-man political movement. He contacted the governor and his federal representatives, he went to the VA and sent letters to the editor of local newspapers, he worked with other veteran’s groups to rectify the situation. Eventually, he was able to get the local American Legion to provide the funds to add a plaque for the Merchant Marine. I hope somewhere on that plaque is the name of the man who got it there, Bill Balabanow.