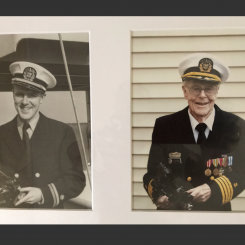 “Fear is something that you have to learn to manage,” says Capt. Hugh Stephens, as he reflects upon the harrowing voyages that marked his service in the Merchant Marine during World War II. Fear divided his shipmates more clearly than branch of service. The Navy gunners and the brave Merchant Seamen who assisted them were peers, brothers in arms. Fearless men fighting for their country. Of course, young Hugh did have an advantage in conquering his fear. Like the rest of the new merchant seamen, he was too inexperienced to know what he should be afraid of, which made his terrifying experiences seem commonplace. The older unlicensed seafarers understood the dangers, and it made the trip more harrowing for them.

Hugh would get his first lesson in managing his concern when he compromised with his mother regarding joining the war effort. His deceased father, a World War I veteran, had impressed on his mother the horrors of war. She was not eager to see her son endure the type of combat that her husband had experienced. So, his mother agreed to let him join the Merchant Marine, believing it to be safer than military service. They did not know that one in every 26 Merchant Seamen would be killed during the war, making it among one of the most dangerous occupations.

Initial training in Sheepshead Bay, Brooklyn, New York, would offer no calm, as ships were being sunk just beyond the New York City harbor. Trained in all the basics, Hugh boarded his first vessel and set sail in a 100-ship convoy. The massive fleet, accompanied by Navy and Coast Guard escorts, made its way across the Atlantic dropping depth charges regularly, which shook the vessels and shattered the momentary peace of their sleeping compartments.

As they approached the Straits of Gibraltar, the convoy broke up and 30 American ships entered the Mediterranean. The waters were filled with unseen enemies. German U-boats moved silently under the waters like sharks. The convoy made their way toward Crete. Here they were met with a heavy Luftwaffe presence. The planes strafed the decks of the ships first with incendiary rounds to light the hatch tarps on fire, and then conducted a second round of strafing with regular rounds. Hugh zigzagged across the deck as the bullets tore into the deck around him. He was assisting the Navy gunners as a loader, and his bravery, as well as that of all the others aboard, ensured that the ship’s defenses were able to hold off the enemy attack.

His first trip to the Persian Gulf with oil field workers and cargo for the Russians lasted eighteen months, and he was on two different ships, having been hospitalized in Mozambique with a ruptured appendix. His next trip from Philadelphia went right back to the Persian Gulf, bringing supplies to be trucked over the Zagros Mountains to our Russian allies. But it would be his third journey, the Murmansk Run, that would be his most memorable voyage of all. A British escort met them off the submarine boom net at Loch Ewe in northwest Scotland, off the North Atlantic. They headed for the Arctic Ocean, a dark and barren part of the world unlike any other. On its return trip, the convoy carried rescued Norwegian women and children from the Island of Soroy, who were transferred to Hugh’s vessel for transport to Scotland. They had not even begun their journey when a British frigate alongside his ship was torpedoed and blown to pieces, with only one survivor of the several hundred in the crew.

The Barents Sea is a frightening place, otherworldly in its expansive silence. The waters swelled and raged for three straight nights as enormous waves lifted the vessel so high that they could only see the stars in the sky before crashing back down. Five ships fell out from the convoy as a result of these terrible sailing conditions, and they were promptly sunk by German forces always lurking one step behind. The women and children aboard the ship wept bitterly, not knowing if the sunken ships had been transporting their husbands and fathers. “The conditions weathered by RA64 [this convoy] were accounted to be the worst endured in the entire North Atlantic theatre," according to the book “Arctic Convoys” by Richard Woodman.

Hugh’s vessel was lucky to have had a great advantage: a captain, a Norwegian-American man with an unshakable calm demeanor whose poise and control comforted his men and the refugees weeping aboard the ship. This captain paced the deck, with his hands behind his back, calmly reassuring the men and singing Norwegian folk songs to the women and children. His command presence and ability to remain calm in the face of such peril would spread to the crew and keep them motivated all the way to their safe arrival in Scotland.

Today, Capt. Stephens can be found teaching at the SUNY Maritime College imparting critical advice to new recruits based on his decades of experience. Despite advancements in technology, safely navigating the seas will always depend on what Capt. Stephens describes as the three senses of sailing — what you hear with your ears, what you see with your eyes and what you feel under your feet. The last one can’t be imitated in most simulations. It can only be learned in the real world.

Capt. Stephens would like for people to know that the “entire world is bridged by the vessels” of the maritime community. The Merchant Marine can be found in diverse employs, from towing steel for bridges, to shipping food and products, to manning hospital ships. “We’re a highway … to the entire world” he says. And Capt. Stephens has traveled those strange and treacherous highways, unknown to most of us, for all his life.