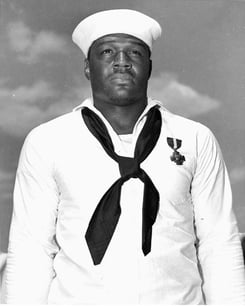 The grandson of slaves, Doris “Dorie” Miller would become the first African American to receive the Navy’s highest medal — the Navy Cross. This historic achievement has gained renewed interest as the U.S. Navy has announced that it intends to name an aircraft carrier after the groundbreaking Sailor. In another first, this would be the first aircraft carrier named after an African American.

Raised in Waco, Texas, Miller would join the Navy at 19 years old to support his family. His mother would later explain that the family was hungry in those times, and so young Dorie set out to earn money for his folks back home. Despite having the physical prowess to excel in football and boxing, the Navy of 1939 decided that Miller belonged with the other African American Sailors working in the mess.

Miller’s first assignment was on the USS. West Virginia which was on the move to Pearl Harbor, along with the rest of the Pacific fleet. Unbeknownst to this young man from a small Texas town, but it would be at Pearl Harbor that he would meet his destiny.

On the morning of the Japanese attack, Miller was below decks doing laundry. When the first torpedo tore into the ship, Miller raced to his battle station, which had already been flooded. Seeking another way to help, he encountered a gravely wounded Capt. Mervyn Bennion. Miller was ordered to carry the captain to safety, which he did before turning his attention to the .50-caliber Browning machine gun on the deck.

He began firing at the Japanese planes. Those who witnessed him in action would later recall their amazement. African Americans were not trained on the guns in those days, so Miller was simply a natural. He fired until the gun ran out of ammunition and then began lifting shipmates from the boat deck through the oil fires to safety.

His gallantry not only resulted in his award of the Navy Cross, it altered the perception of African Americans in the armed forces. Shortly after an article in The New York Times related Miller’s story to the American public, the Navy announced that it would begin training “negro recruits” as gunner’s mates, radiomen, radar operators and a host of other critical specialties. Miller himself would be given the opportunity to speak before the first class of African American Sailors to graduate from Camp Robert Smalls. His main talking point whenever he gave a speech was his tremendous pride in the U.S. Navy.

Sadly, Doris “Dorie” Miller would not see the end of the war. Sent to the South Pacific on the escort carrier Liscome Bay, Miller would be killed in action after a torpedo exploded the vast cache of ordinance aboard the shipping, killing most of the crew instantly. His death was a terrible loss for the entire U.S. Navy, but his legacy continues to echo through the history of the greatest sea fighting force the world has ever known.