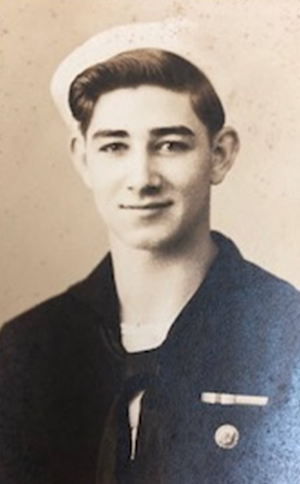 Imagine yourself looking up into the darkest night sky, sailing silently through the frozen North Sea en route to the Soviet port of Murmansk. Through the hushed blackness of the inscrutable skies come the sounds of German planes. The peaceful sea is alive with speeding torpedoes. Your convoy splits up to make themselves harder to target. Seemingly alone in a vast hostile world, you make your way along the icy deck to the sounds of frantic shipmates and frenzied commands. And, you are only 16 years old.

This was the reality for George Koch as he carried out his mission to deliver vital supplies to the Soviets during WWII. Though supported by a British Navy escort, his convoy came under regular attack from both the sea and the sky. By this point in the war, the Germans were losing and efforts to prevent resupply among the allies was a top strategic priority for them. Across George’s convoy, gunners searched the darkness for enemy planes as the British ships dropped depth charges to destroy hostile submarines. This was the nightly routine.

But even in the midst of such terrifying circumstances, George was able to see a certain beauty in his surroundings. Staring into the somber skies on Christmas Eve he was suddenly shocked to find the night come alive with colors. It was the Northern Lights, which he had never seen before. George still recalls the event, saying that he felt like even the dark skies were celebrating the birth of Christ.

Upon arriving in Murmansk the ship was met by a group of older Russian women. George asked where were the children, to which they responded cryptically that the children were in a safe place. George asked where were the young women (surely only out of curiosity). The older women responded that the soldiers' wives accompanied them to the front lines. It was a harsh introduction to the realities of the war. The place he had entered was bombed nearly to rubble and the youth seemed to have vanished. But again, there was beauty to be found even in this grim place as the older women guided George and his comrades to a theater where an orchestra played classical music for them throughout the cold and dark night.

George would go on to become a Naval gunner when he switched over from the Merchant Marines to the Navy in 1945. Prior to joining the Navy, George began dating a young woman named Jean Cook who would later become his wife. George joined the International Brotherhood of Electrical Workers and had two sons and is now a proud grandparent. The naval tradition lives on in his family as both his son Jack and his grandson Jason served in the Navy during Vietnam and Desert Storm, respectively.