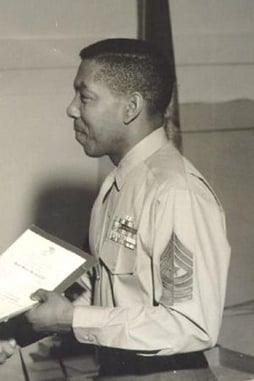 “As one reads through the list of combat medals … one wonders how a single Marine could have seen so much action and managed to survive,” said retired Marine Corps Lt. Col. James Zumwalt of the intrepid and legendary Louis Roundtree. Roundtree would earn the Silver Star and other distinguished honors in two separate wars: the Korean War and the Vietnam War. In both conflicts, he proved to be a truly formidable force when outnumbered by enemy troops.

Joining the Corps in 1948, Louis Roundtree would become one of the first African Americans to serve in an integrated U.S. military unit as President Truman gave the order for integration that very year. Many of his compatriots would prove their caliber in the coming years, putting to rest any questions of the merit of integrated forces, but Roundtree would truly stand as a testament to the bravery and sacrifice of all Marines through his courage and gallantry.

Landing at Incheon in 1950, Roundtree and his fellow Marines made short work of a dug-in North Korean battalion and moved north to the Chosin Reservoir. It was here that he would first distinguish himself. With his weapon disabled by enemy fire and his hand badly wounded, Roundtree picked up the rifle of a wounded Marine and charged the enemy position. Halted in his advance by a satchel charge, he refused medical attention and instead focused on bringing assistance to his fellow wounded comrades.

Fifteen years and numerous assignments later, Roundtree was in Vietnam serving as an adviser to the South Vietnamese Army. When his position was overrun by Viet Cong forces, he was initially listed as Killed In Action. He was found later with his uniform torn and his body showing the signs of the battle. He was flown to Da Nang where he would be interviewed for the “Today” show on NBC.

Louis Roundtree’s story is truly captivating, but the real story was his concern for his fellow Marines. In each instance of combat, Roundtree can be remembered tending to the wounded and risking his life for the lives of his compatriots. This is truly what Marines are made of.