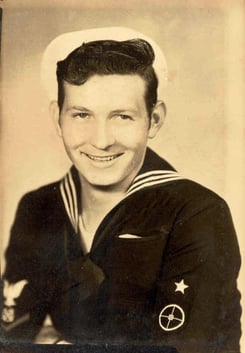 You are unlikely to encounter anyone with a greater sense of purpose, responsibility or obligation than Norman Peden. From his initial enlistment in the Navy, to his refusal to sit out the war in a safe posting, to his decision to leave a secure job shortly before retirement in order to conduct missionary work in the Caribbean, Norman Peden was the definition of a man on a mission. And those missions took him to hell and back more than once.

Still in high school, Norman felt certain that the United States would be pulled into the wars raging across Europe and Asia. Before America even entered the fray, Norman had enlisted in the U.S. Navy. He would participate in several voyages across the Atlantic Ocean before his first vessel, the USS Quincy, passed through the Panama Canal and headed out to the Pacific.

On Aug. 9, 1942, the USS Quincy was struck by Japanese torpedoes during the Battle of Savo Island. The deck below Norman exploded. The gunner across from him became hysterical and would never make it off the ship. Another crewmember, already injured and being guided to safety by a shipmate, was flung clear off the ship by the force of the explosion. Norman knew he had to act quickly for the sake of himself and the rest of the crew.

Most of the life rafts had been burned as fires spread across the ship, but two remained. Norman cut one down and it was quickly taken by other desperate Sailors. After cutting down the second raft, Norman made sure to stay with it. The raft filled up with crewmembers, and others clung to ropes on the side. Throughout the night, the men watched as Japanese vessels searched the waters for survivors. Luckily, their raft was not found and the next day they were rescued by an American destroyer. Had Norman not cut down the rafts there is no telling how many lives would have been lost in addition to the 550 that perished with the ship.

The Battle of Savo Island is remembered as a devastating defeat for the U.S. Navy. This was the beginning of the naval campaign in Guadalcanal. Several other American and Australian vessels were sunk during the battle and their relics still line the bottom of the straits, which have since been dubbed the “Iron Bottom Sound.”

Transported back to Pearl Harbor, Norman spent several months recovering. But as soon as he was ready, he asked to be sent back into harm’s way. His commanding officer was shocked, telling Norman that he could remain at Pearl Harbor and not see any more action. But Norman felt an obligation to see the war through. After several voyages, Norman found himself aboard the USS Wake Island, where he and the rest of the crew barely survived a close encounter with a kamikaze, which tore a large hole in the ship but failed to sink it.

Returning home, Norman found a new purpose with his new wife. He left the Navy and worked for the Goodyear tire factory until he was just within sight of retirement. But always ready to accept his next calling, Norman left the factory and became a missionary for several years in the Caribbean. He and his wife would then go on work with the Bethesda Boys Ranch outside of Tusla, Oklahoma, helping delinquent youths to better their lives. From the raging oceans of the South Pacific to the dry land of Oklahoma, Norman Peden gave everything he had to help others.