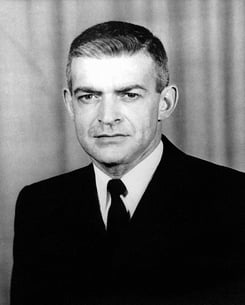 It is important to remember that not every hero proved their courage by storming a beach or charging a bunker. For some, the ultimate test of bravery is providing faith and comfort as chaos and suffering is raging all around you. Such is the story of Father Vincent Capodanno, a U.S. Marine chaplain whose actions in the jungles of Vietnam would result in his posthumous award of the Medal of Honor.

Born in 1929 to Italian immigrant parents in New York City, Capodanno’s faith would prove instrumental in enduring the difficulties of the Great Depression. In 1958, he became an ordained Roman Catholic Priest and by 1965 he had joined the U.S. Marines as a chaplain. He would serve with several units before joining the 3rd Battalion, 5th Marines in the Que Son Valley of Vietnam.

His battalion encountered a large North Vietnamese army unit and became pinned down. As casualties mounted, Father Capodanno traversed the battlefield, caring for the wounded and performing the last rites. He continued his important work even as he was wounded multiple times. Father Vincent Capodanno was killed by enemy machine gun fire while attending to his fellow Marines. He was posthumously awarded the Medal of Honor.