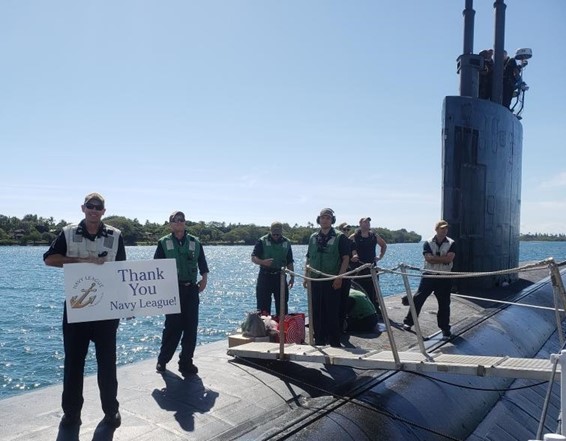 USS Greenville (SSN-772) returned to Pearl Harbor on Sept. 11 and was greeted by the Honolulu Council of the Navy League.

September saw some homecoming events for the Honolulu Council. On Sept. 11, the submarine USS Greenville (SSN-772) returned safely after a successful deployment. Kim Nethery, from the Navy League Honolulu staff, has a husband on the boat. Bravo Zulu, James, and welcome home!

On Sept. 24, the Navy League met up with the crew of the USS North Carolina (SSN 777) on their return to homeport. After six months at sea, they were very happy to be met at the pier with Papa John’s pizza.

Friday, Sept. 18 was MIA/POW Day, and the council marked it by sharing a story of two very special people. Jim and Carole Hickerson are members and have served Honolulu Council for decades in different capacities. Jim was a board member and headed the council’s bridge speaker program for many years. Carole ran the golf tournaments and volunteered at every other event. Both currently serve as national directors of the Navy League of the United States.

The complete story of Jim and Carole was told in an article on the council’s website, which can be found at www.navyleaguehonolulu.org/jim-and-carole.html.