Standing in the Presidents Circle with Dave Reilly

The Navy League of the United States created the President’s Circle in 2000 to recognize and highlight the importance of charitable contributions to our initiatives on behalf of our nation’s sea services.  It is a select giving society that recognizes steadfast supporters who make an annual gift of $1,000 or more to any Navy League-affiliated programs, includes gifts to the Navy League Foundation and Naval STEM Institute.

With the roll out of our newly reinvigorated President’s Circle, we will be featuring current members  and the reasons why they chose to “Stand in the Circle” this year.  Many have been members of the President’s Circle for multiple years. We would like to recognize them for their financial commitment, leadership and support to our mission.

Member of the President’s Circle since 2016

The need for the Navy League to have a fully funded budget to support its mission of educating congressionals and the civilian population on the importance of the sea services in maintaining peace in the world. Recall he words of Navy League’s founder, President Teddy Roosevelt, “A good navy is not a provocation to war. It is the surest guarantee of peace.” I feel it is my obligation to support the sea services to assure our ability to sail in harm's way to defend and protect the freedoms we enjoy as Americans. 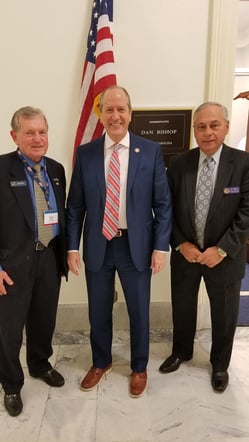 Because as Mr. Alfred Thayer Mahan said, "whoever rules the seas, rules the world," and the sea services are what gives us the capability to rule the seas. We as a nation must stay relevant and able to thwart the attempts of the many threats that exists around the world today. One only needs to recognize that Congress and the general population have fewer and fewer veterans among it and, as a result of that lack of first-hand experience, may not fully appreciate the importance of the sea services being properly outfitted to discourage the enemy from threatening us in times of peace and to defeat the enemy in times of war. It is therefore incumbent upon us that know and appreciate the importance of providing our sea services what is needed to assure success in mission, to educate those that serve in Congress as well as the civilian population that elects Congress of that importance. The Navy League provides us the way to provide that education.

Bad budgeting process and lack of a consistent plan to accomplish the mission of the sea services. Too often the planned budget is changed by things such as a continuing resolution [CR] or the Budget Control Act, and as a result the sea services are unable to execute shipbuilding and war fighting priorities. A recent Secretary of the Navy report to Congress [showed] the Navy's shipbuilding efforts have wasted over $4 billion because of CRs and the inefficiencies that a CR inserts into the acquisition process. If we ever convince Congress of how bad this practice is for not only the sea services but also the country, we will overcome one huge obstacle to the success of the services. We have to keep trying.