Standing in the President's Circle With Frank Russo

The Navy League of the United States created the President’s Circle in 2000 to recognize and highlight the importance of charitable contributions to our initiatives on behalf of our nation’s sea services. It is a select giving society that recognizes steadfast supporters who make an annual gift of $1,000 or more to any Navy League-affiliated programs, includes gifts to the Navy League Foundation and Naval STEM Institute.

With the roll out of our newly reinvigorated President’s Circle, we will be featuring current members and the reasons why they chose to “Stand in the Circle” this year. Many have been members of the President’s Circle for multiple years. We would like to recognize them for their financial commitment, leadership, and support to our mission.

Member of the President’s Circle Since 2020 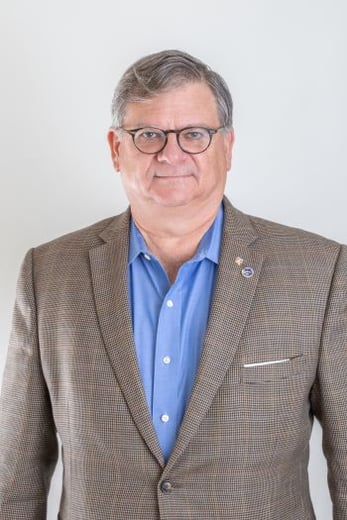 I believe in our mission — support of the sea services, and the women, men and their families that serve, is needed as much today as ever before. To succeed, we need the best that America has to offer, and to achieve, this, there needs to be an advocate for them and that is the Navy League!

I was conducting an inspection of the NJROTC unit at George Washington High School in the Bronx, New York City. I was so humbled to see the dedication, teamwork and enthusiasm these young adults, our future leader, put into the success of their unit.

Twenty-seven years of active and reserve duty. I got to know the type of individual who puts their nation first, willing to serve for a purpose greater than themselves. I had the privilege of working closely with these individuals and experiencing first-hand what can be accomplished when you work as a team. Also, we used to say, "Navy spouse, toughest job in the Navy," so supporting their families is just as important.

The greatest asset of the sea services, all the services, are the women, men and families that serve. We should never forget that these individuals need the resources required to succeed, which allows us our freedoms that we enjoy every day.

Why should others consider giving to the Navy League of the United States?

The Navy League is the voice for those who believe in our nation and for who serve it, especially at sea.

Do you have any closing thoughts?

A former naval officer once said, "Ask not what your country can do for you, ask what you can do for your country" as he was sworn in as the 35th president of the U.S. And as John F. Kennedy also said, "Any man who may be asked in this century what he did to make his life worthwhile, I think can respond with a good deal of pride and satisfaction, 'I served in the United States Navy,'" We need today women and men who will take up the mantle of service to keep the United States a great nation, continuing to strive for that "more perfect union."